Lecture of Prof. T. Tomaras at “Experimental” Lycee of Rethymno 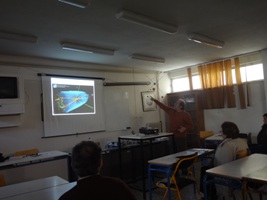 Professor Tomaras was invited by the science instructors of the “Experimental” Lycee of Rethymnon to present the current status and recent developments in Elementary Particle Physics and Cosmology.

Prof. Tomaras gladly accepted the invitation. The title of his talk, which took place on the 11th of January 2014, was "The First Three Minutes", inspired from the book of S. Weinberg. However, its content was a modern version of the book, consisting of the present knowledge of elementary particle physics and cosmology and how the two influence each other. In particular, the speaker explained the importance of the recent (2012) discovery of the Higgs particle at CERN, the change in the structure of the state of matter as a result of varying its temperature as predicted theoretically and verified experimentally recently in the laboratory, and how all this new knowledge is incorporated into a more complete and coherent story about the evolution of our Universe.

The presentation was followed by a long discussion session, during which the enthousiastic students, parents, teachers and other interested Rethymnians, who attended the lecture, asked many questions and made interesting comments.